Something for everyone and more… with a property in the Bagni Di Lucca area, the coast and the mountains are literally on your doorstep.

With ski resorts, beach resorts and world renowned cities of culture all within one hour, Bagni di Lucca really does have something to offer everybody.

Lucca, Firenze and Pisa to indulge your aesthetic and cultural side or Forte de Marmi and Marina di Pietrasanta for an exclusive beach experience among the glitterati of Milano. Or if you’re feeling more athletic, there is the ski resort of Abetone to hone your après-ski skills. 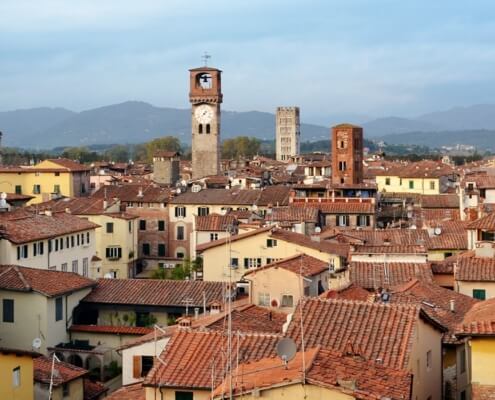 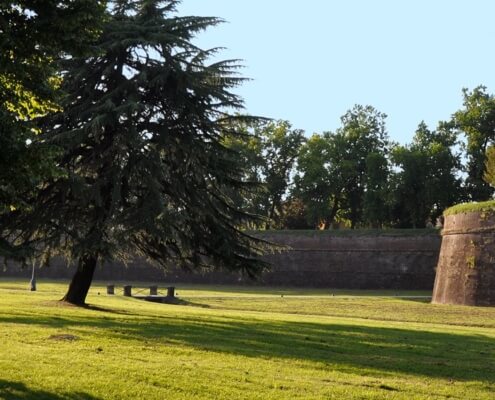 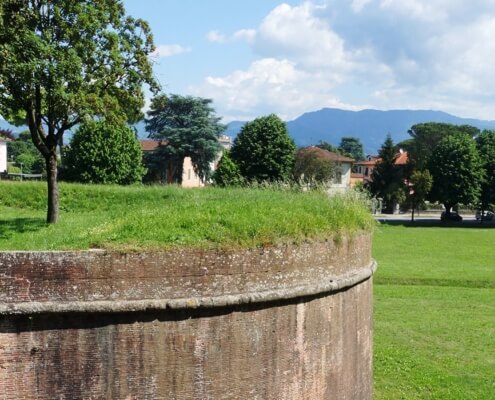 Bagni di Lucca is a collection of 25 villages in the Lima Valley in Northern Tuscany. It has been called Bagni di Lucca since 1862. The commercial centre, and home of the comune, is La Villa, which sits beside the Lima River. Pretty Ponte A Serraglio is one kilometre down river. The first casino in Europe was built here and it is a beautiful 19th century building resembling the Assembly Rooms at Bath or Harrogate. The railway station is at Fornoli, one kilometre further down river towards Lucca.

As well as these 3 hamlets there are many others dotted throughout the hillsides, including Benabbio, Lugliano, Casabasciana, Granaiola, about 25 in total.

Bagni di Lucca has been known for its thermal springs since Etruscan and Roman times. In fact, the name means “Baths of Lucca”. In 1101 the Countess Matilda had the nearby Ponte della Maddelena, also known as The Devil’s Bridge, built so that she could more easily reach the health giving waters.

Since Lucca unified the area in 1308 and transformed it into a spa oasis it has been visited by people from all over the world to ‘take the waters’. Its heyday was the early 1800s, when Napoleon’s sister Elisa Baciocchi, who was Grand Duchess of Tuscany at the time, built the road to the village as she liked to spend her summers there.

After the casino was built, Bagni di Lucca became popular with foreigners. Writers and artists flocked to the area because of its beauty and climate. Byron and Shelley and the Barrett Brownings were among those who liked to visit and had property in the area.

Bagni di Lucca and the surrounding area is a great place to experience authentic Italian life, where in some cases, things haven’t changed much over the years. It is still possible to see a shepherd with his flock and vegetable gardens lovingly tended, especially in the mountain villages. Take the time to visit the outlying villages…you won’t be disappointed.

The Province of Lucca

With Bagni di Lucca in the northeast, the Province of Lucca spans several different areas: the Versilia coast, overlooking the Tyrrhenian Sea; Garfagnana, on the border with Emilia Romagna in the northeast; and, further inland, the Valle del Serchio and the Lucca plain.

Changing landscapes succeed each other, creating magnificent sceneries. The Parco delle Alpi Apuane provides the backdrop to the blue sea and the beaches of Versilia, while the stretches of hills covered by olive trees and woods dominate the landscape of Garfagnana. The territory is home to numerous other wonders, from Lake Massaciuccoli to the previoulsy mentioned thermal springs of Bagni di Lucca and the coastal dunes of the Migliarino-San Rossore-Massaciuccoli Natural Park.

The Province is rich in tradition and history, and thanks to its central position it has been a thriving trade hub for centuries. The Via Francigena – the great Medieval pilgrimage route along which lie villages, castles, abbeys and parish churches – traversed it from Canterbury to Rome.

In the countryside around Lucca are beautiful historic villas surrounded by spectacular parks, from Villa Torrigiani to Villa Mansi.

These remains from the past coexist with the social life and entertainment scene on offer in Versilia’s seaside resorts, including Viareggio, Lido di Camaiore, Pietrasanta and Forte dei Marmi.
From the coast inland, art centres and seaside resorts, entertainment and culture, history and nature render the Province of Lucca unique and extraordinary.

Lucca itself, a city of ancient origins, surrounded by its boundary wall that dates back to the 16th-17th Centuries. This great work of military engineering, with its ramparts and bastions, is today a unique and scenic public area. Particularly evocative is the old town, which has kept intact its Medieval appearance composed of typical narrow streets and piazzas overlooked by stone towers, tower-houses and brick houses with arcades.

Among the most typical streets, Via Fillungo stands out, the main axis here, surrounded by noble buildings and ancient towers the likes of the famous Torre delle Ore. Via Guinigi, where the complex of Medieval buildings built by well-to-do families is concentrated, is equally worth noting.

Religious architecture of particular importance includes the Duomo di San Martino with its magnificent facade and interiors rich in precious artworks; the Duomo Museum that houses paintings, sculptures and liturgical furnishings; the Church of San Michele in Foro, a unique example of Pisan-Lucchese architecture; and the splendid Basilica of San Frediano.

Outstanding examples of civil architecture are: Villa di Paolo Guinigi (15th Century), site of the National Museum showcasing Etruscan and Roman archaeological finds and several painting collections; Palazzo Mansi with its priceless furnishings and site of Lucca’s second National Museum; and the 17th-Century Palazzo Moriconi-Pfanner, a magnificent example of Lucchese Baroque, surrounded by a spectacular garden. Neither should the birth house of musician Giacomo Puccini be passed up. It has been converted into a museum showcasing the maestro’s documents and mementos.

Tuscany is well served by two airports, Pisa and Florence but we are also within striking distance of Bologna and Genoa airports too.

With flights from Pisa to most European countries as well as Moscow and New York, a second home in Tuscany is now a real prospect for most Europeans.

Train links through both Pisa and Florence allow fast, efficient and affordable access to all of the main Italian cities. 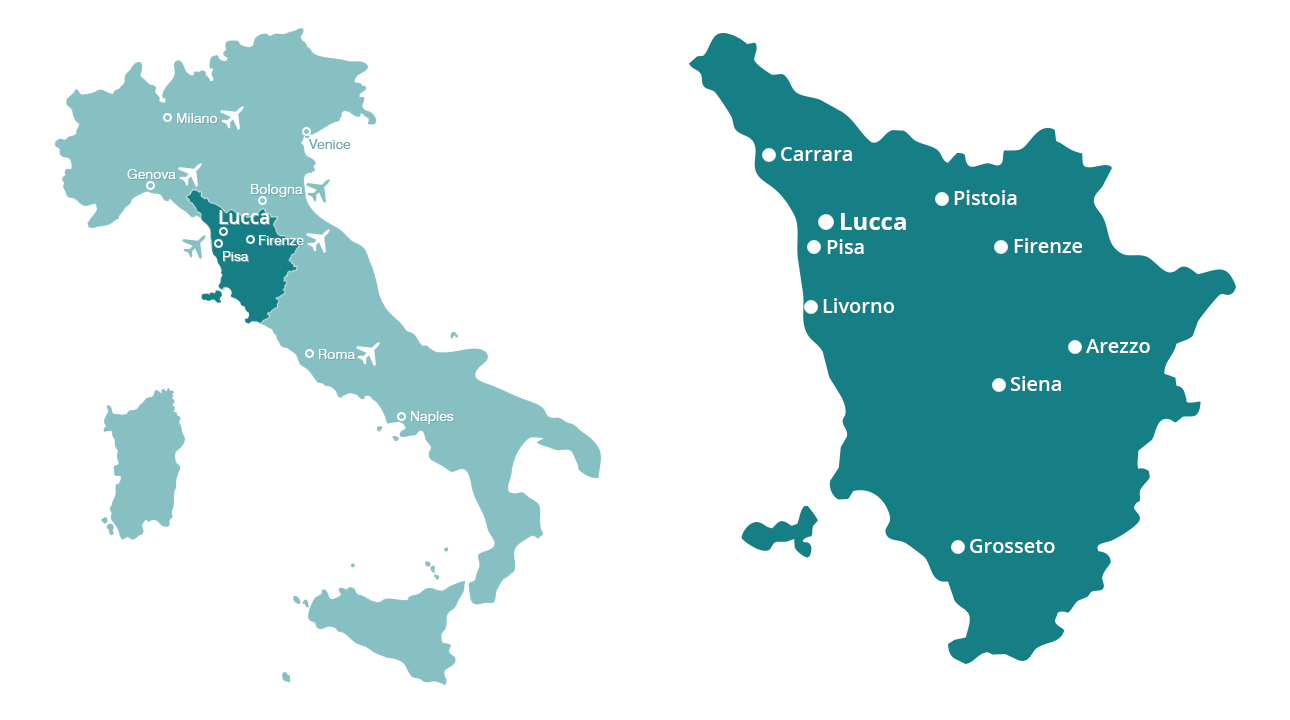